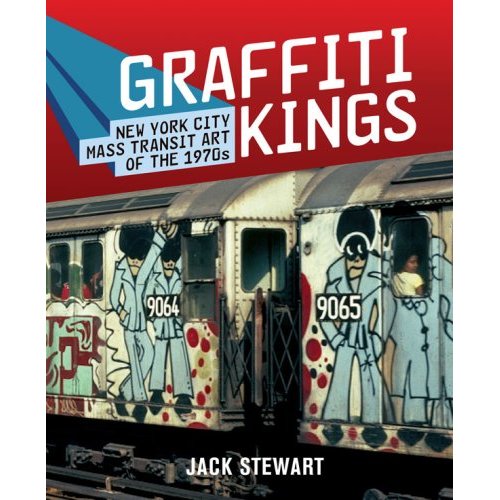 Amazons info text: Graffiti Kings is the definitive book on New York’s subway graffiti movement, an unprecedented creative explosion that occurred across the five boroughs during the 1970s. This rare, firsthand account of the birth of this movement is the first and only graffiti book to reveal what happened behind the scenes when writers put their lives on the line to grab a piece of fame from a faceless urban landscape. Through personal interviews and over 275 full-color, previously unpublished photographs, the colorful origins of subway graffiti are brought to life. Legends such as Taki 183, Blade 1, Phase 2, and Co-Co 144, as well as the city officials who saw the writers as public menaces and their art as vandalism, give accounts of everyday struggles, each full of new advancements, excitement, and risk. Although author and photographer Jack Stewart maintained a low profile at the time, his work is now a graffiti-world legend: rumored to exist, seldom seen, a near-equivalent to the Dead Sea Scrolls. Alongside archival photographs of everything from vibrant bubble-letter and 3-D pieces to the Holy Grail, the whole-train pieces, are maps, images, and ephemera that help fill out the complete story. A celebration in words and pictures of graffiti’s golden age, Graffiti Kings is a book sure to be coveted by those fascinated and inspired by this uniquely American urban art form. Full info here.