“I started a new graffiti/street art project we call “The Movement” with my friends Rime and Augor. The concept is to paint graffiti that doesn’t center around the ego or crew. We have lots of big plans, we are just getting started.”

Hello Revok, could you start with explaining your name and when you got into graffiti?
I started writing REVOK when I was 14 in 91′. About a year after I started writing graffiti, no great story in regards to the origin of the name, I just liked the letters.
You are original from Los Angeles right?
I grew up in the suburbs outside of LA, in and around the Riverside area.
Recently a new thing has come from your hand,these “Los Awesome” billboards seen lately on some blogs? Can you explain a bit about this, is that what you do as commercial work or?
That was not a commercial gig, I started a new graffiti/street art project we call “The Movement” with my friends Rime and Augor. The concept is to paint graffiti that doesn’t center around the ego or crew. We have lots of big plans, we are just getting started. 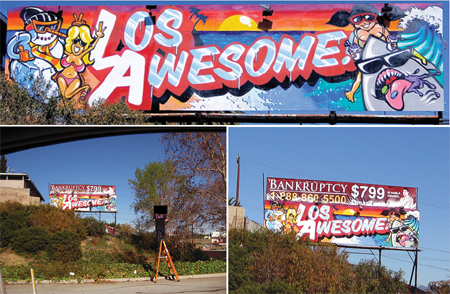 The styles from Westcoast America looks alot different to what we see from the Eastcoast and New York City, can you explain why there is such big difference in style and lettering? Who you are influenced by? The first writers people heard of back in the days out were writers like Hex and Slick, are they still up?
The origins of LA style are broken up into 2 factions. Basically the east side and the west side. The east side being a much heavier, blockier gang/cholo influenced style, while the early west side writers and crews had a more playful New York-ish type of style. So what exists in LA today, and seems to be influencing the global scene heavily, is a hybrid of both. Hex retired from graffiti in the early 90’s, apparently he found “Jesus” and decided graffiti was evil. His counterpart Slick however who was a much more influential figure in the LA scene and is still active to this day. The guys whom were my biggest influences and heroes growing up were Risk, Charlie, Dream, Green, Oiler and later Gkae and a little later Ayer, the greatest LA bomber of all time (R.I.P.) along with all of the early guys from AWR, specifically Krush and Tyke. Both Risk and Krush are still regularly painting to this day. 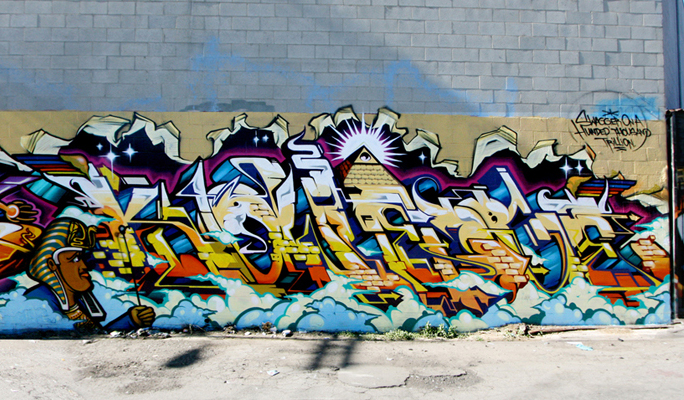 Have you ever been to China like Rime and Persue did for a graffiti competition out there?
The only Asian countries I have travelled to and painted in are Japan, Korea, Taiwan, and Malaysia, I havent been to China yet.
As you mentioned in your blog entry the TMD crew from New Zealand will go to the Write4Gold 2009 Finals to defend their crown, can we expect the MSK to enter this competition in the future and rep the American Westcoast?
MSK/AWR isn’t going to compete in any competition until there is a minimum of 50,000$ purse offered to the winning crew.
What are your plans for the future, more gallery shows and putting your artwork into the serious art fairs and stuff? I mean you are travelling a lot, what you are earning your living from?
While I do some “fine art”, thats not my focus at the moment. I am working mostly doing illustration and graphic design stuff. When I am ready I will shift my focus towards doing paintings for a gallery setting. 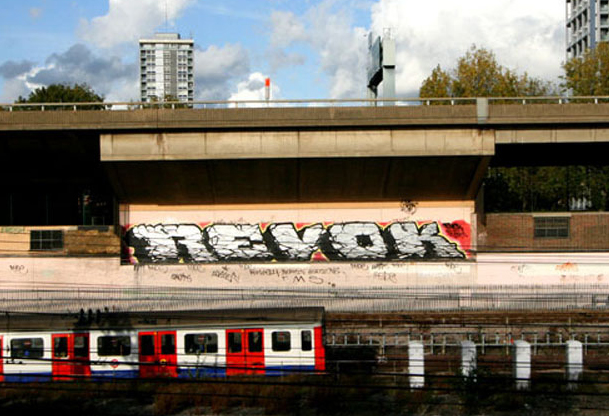 Whats your opinion on graffiti writer sponsoring in general? Are you sponsored by a brand?
I am all for it, why shouldnt we be? Graffiti has matured from a small underground subculture, to a huge global phenonenon. Graffiti influences countless facets of popular culture and has also spawned a growing industry. No company should be profiting off of this culture without supporting it and giving back. Just like skateboarding in the mid-eighties. I am trying to break ground on this concept and set a precedent for the future generations of writers to come, this shit is only going to get bigger, despite the authorities efforts. Right now I have a few sponsorships and endorsement deals… The North American distributors of MTN sponsor me, the actual company in Barcelona wont officially sponsor any artists. Currently I am working on another deal with a skate and lifestyle brand KR3W, and I am also part of RVCA’s Artist Network Program. Also, 2 years ago, myself, along with Saber, Retna and Ewok signed a endorsement deal with Boost mobile, a cellphone company here in the States.

Can you tell us a bit more about the situation in Los Angeles, as we know there are gangs, many skilled writers, many art shows and of course Hollywood. At all it seems to be an amazing place, in short whats your summary on this city and what advice can you give European tourists to stay safe there and have a good time?
I love Los Awesome! Its the greatest city in the States. As far as the danger factor, the gang culture here used to be a much bigger issue than it is today, Your only going to have problems with gangs here if you go wandering into certain areas, or do dumb shit. Here in LA, graffiti is all about bombing good spots with good pieces. As far as I know the only writer to come here from Europe and paint shit in the street is some guy called Jam from France. I know a few guys have come here and done the subway, but none of us in the city ever saw it. I dont see the point of travelling to another city to paint unless you are coming to put in work and make your presence known. Personally I feel travelling across the globe to “play it safe” and just paint a legal wall or two is gay. So I am not giving any pointers to be safe, if you come here, come to put in work and do some real graffiti, thats exactly what I am going to do when I come to your town.
Cheers for the smalltalk and keep up the good work!