Hi, I’m Keith Baugh – a painter and photographer living in rural Gloucestershire, England. Thanks for the opportunity to talk to you about my soon to be published book ‘Early New York Subway Graffiti 1973-1975: Photographs from Harlem, South Bronx, Times Square & Coney Island’.

ILG: Where are the photos from?

I took this series of Subway Graffiti photographs in New York City during the summers of 1973 and 1975 whilst on vacation in America. Initially, I intended to photograph roadside ephemera including advertising signs, neon and billboards alongside classic American cars as source material for a series of paintings – some examples of these early paintings can still be seen on www.keithbaugh.com


ILG: Why did you take them?

Taking the subway into Manhattan after arriving at JFK in the summer of 1973, I boarded what must have been one of the earliest and most graffiti-hit carriages on the New York Subway system. The interior of the carriage was carpet-bombed with broad black magic-marker tags covering every possible surface with the view from the windows totally obliterated from the outside by spray paint. From the speakers of a ghetto-blaster carried on the shoulder of a young dude across the carriage, Bob Dylan informed everyone that… ‘something is happening here and you don’t know what it is, do you, Mr Jones?’ For me, this was a very potent and intriguing welcome to New York City. These incredible spraycan paintings on the subway cars had an immediate and powerful creative impact, one that I wanted to capture on film. 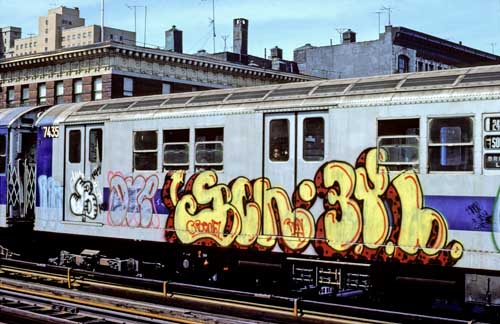 I soon found out that trying to photograph the graffiti from the underground subway platforms, using flash photography, attracted far too much unwanted attention and became more like an invitation to a mugging! An American friend suggested I travel uptown to the South Bronx to the elevated tracks of the New York Transit Authority to take the shots of the painted trains in daylight. After point-blank refusing to accompany me on this quest, his parting words to me was to ‘keep both eyes open for gang members of the Savage Skulls’.

ILG: Where have the photographs been for 35 years?

I was an art teacher in London during this period (1970s) and I recall showing the subway graffiti slides to groups of art students. Of course, this resulted in a spate of low level graffiti bombing around downtown Peckham and rumbles of protest in the local press. This is potent stuff, I thought, and then filed the transparencies away and forgot about them for the next 30 years.

ILG: Why publish the photos now?

Around 2005 I was fortunate to meet London based writers/urban legends Tizer and Shucks. We talked awhile about graffiti writing in general and when Tizer mentioned the huge debt owed to the old school kings of New York Subway Graffiti, I remember saying, ‘Hey, I took loads of photographs of that stuff and I still have them stashed away somewhere’!! Immediately on seeing the slides, both Tizer and Shucks recognised and pointed out to me the importance of these photographic images.

ILG: How was it to take those photos back then?

Standing on the elevated platform at 161st Street waiting to photograph the graffiti writing, I recall various oddball characters waiting for the downtown train walking past and offering to enlighten me about Jesus, asking if I wanted to buy any kind of drug or maybe a nice Rolex watch. A guy shouted an impolite suggestion across the tracks as to where I might stick the Nikon. All offers were graciously declined. I decided to keep the camera hidden until the trains arrived, the platform cleared and then I started to click the shutter. 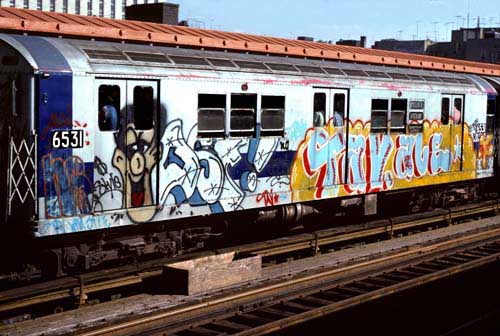 I still vividly recall the thrill of taking these photographs. The spray paint colour was rich, fresh and bright in the strong sunlight and very recent attempts to clear the windows with some kind of paint stripper gave off a strong acrid smell. The graffiti was so extraordinary and unique that I muttered a few times under my breath ‘only in New York, only in New York.’ To my English eye this was an incredibly strong cultural phenomenon with the constant stream of writing on the passing trains providing an exotic visual mix of beat poetry, bebop, jive, pop art, jazz and Puerto-Rican funk … ‘Chico / Chico / Super Strut / Hondo / Sin / King / Silver Tips / Lil Hawk / Blade / Stoney Dice / All Jive / Stay High / Sky / Ale One / Soul Gag / Death / Kill / Mico / Mico and on and on. 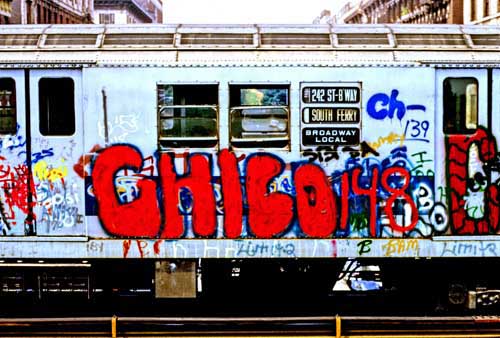 At the time, the process of taking the photographs, the being there, was more important than seeing the finished results, you could say that the journey was more important than arriving at your destination. Remember, this was decades before digital photography. You took the shots using 35mm film and sometimes waited weeks or months before getting the films processed. During this time you questioned yourself about having used the correct ISA setting, shutter speed, light reading and if you remembered to take the lens cap off the camera.

ILG: Describe the publication to us and the process of putting it together.

Having been made aware that good quality photographs from the golden era of New York Subway Graffiti from the early to mid 1970s are relatively rare, I wanted to produce a book that reflected the important social, historical and artistic status of the work. The book design is clean and crisp with mostly full-page photographic plates all uncropped from the original 35mm Kodachrome transparencies. The photographs show tags and early masterpieces by over 150 old school New York writers including ALE ONE / ALL JIVE / BEN 3YB / BILLY / BLADE / BUG / CASH / CHICO / CLIFF / COMET / CRACHEE / DEATH / DOC COOL / HONDO / HYSEN / IN / JET / JUMP / KING / KOOL KEVIN / LAVA / LEFTY / MONO / NOD / PHASE 2 / PRIEST / RIFF-RAFF / ROACH / RUBEN 118 / SILVER TIPS / SIN / SKY / SLY / SPENCER / STAFF 161 / STAY HIGH / STIM ONE / SUPER STRUT / TRACY 168 / VAMM / WORM / YAZ etc. To me these are important images not just from the history of graffiti but from the history of art. 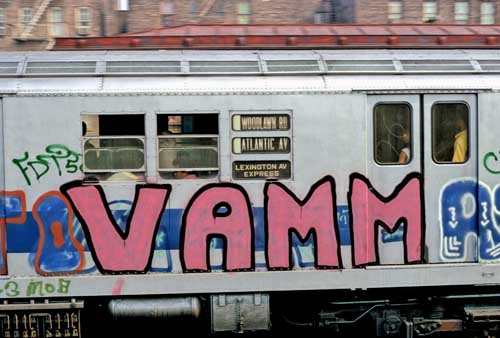 I have also included in the book a selection of photographs that I took in Times Square and Coney Island in 1975. I saw a direct correlation between the graffiti on the subway cars and the giant 3D letterforms on the hand-painted billboards, advertising signs and wall paintings in Times Square and the signs that adorn the world famous rides at Coney Island. This visually powerful advertising media imagery, from the downtown playground of the kids from Harlem and the Bronx, must have had a subconscious impact and influence on the young graffiti writers who produced the extraordinary spray-can painted names on the subway trains. The last photograph in the book is a chilling shot from the Coney Island boardwalk of a police bus with bars on the blacked-out windows and the words ‘PRISON ON WHEELS – STOP THAT CRIME YOU CAN’T WIN’ painted along the side. Even in those early years the New York authorities were well and truly on the case! 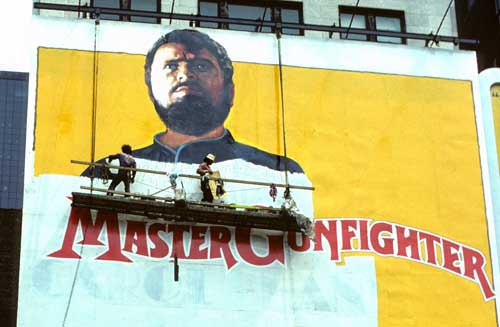 ILG: What’s your opinion on graffiti now compared to 35 years ago?

My awareness of graffiti writing stretches back to 1969 when the post-situationist group King Mob (including art student/activist and future Sex Pistols manager Malcolm McLaren) hit the walls of my neighbourhood around Notting Hill in London with a graffiti blitz that included quotes from the romantic poets. I make reference to this and have included my photographs of King Mob graffiti in the foreword to the book. One piece, using the William Blake lines ‘THE TIGERS OF WRATH ARE WISER THAN THE HORSES OF INSTRUCTION is, come to think of it, very close in style to the New York wall writings of Samo.

The best graffiti writing today is very exciting, building on previous styles and advancing form and technique…. exactly the same exhilarating route that faced the young Ale One, Blade, Comet and Staff 161 in the early 1970s.

ILG: What do you think of graffiti media today? The IloveGraffiti blog? Other books on oldschool NYC graffiti like Graffiti Kings, Birth of Graffiti, Subway Art 25th ed.?

The internet has opened the doors for graffiti to flourish in every corner of the world. I keep up to date with developments in the graffiti world through remarkable sites including artcrimes / dutchdamage / 149st. / subwayoutlaws / Wooster-collective and of course Ilovegraffiti.blog. On my bookshelf, amongst hundreds of art books I have a prized copy of The Faith of Graffiti, a shelf full of Graphotism and many other graffiti books and magazines. I am hoping that my book will get to sit comfortably between those two classics, Jon Naar’s Birth of Graffiti and Martha Cooper and Henry Chalfant’s Subway Art. 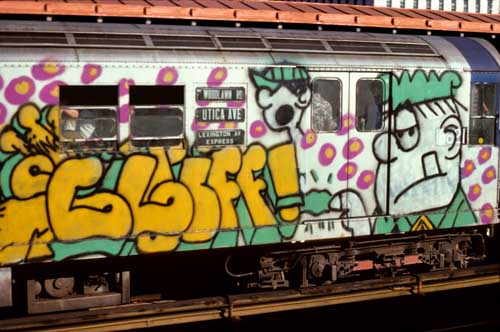 The first edition of Early New York Subway Graffiti is a special edition hardback of 1000 copies with 128 pages containing 180 previously unpublished photographic plates with a publishing date of December 3rd 2009. Signed copies of the book will be available from www.keithbaugh.com
© Copyright Keith Baugh 2009 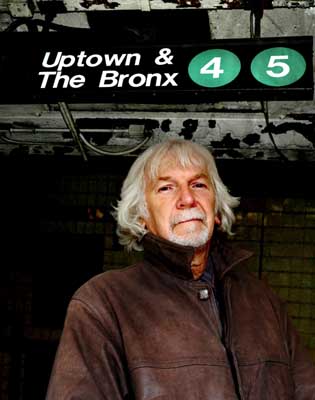 Video with previews of the book: