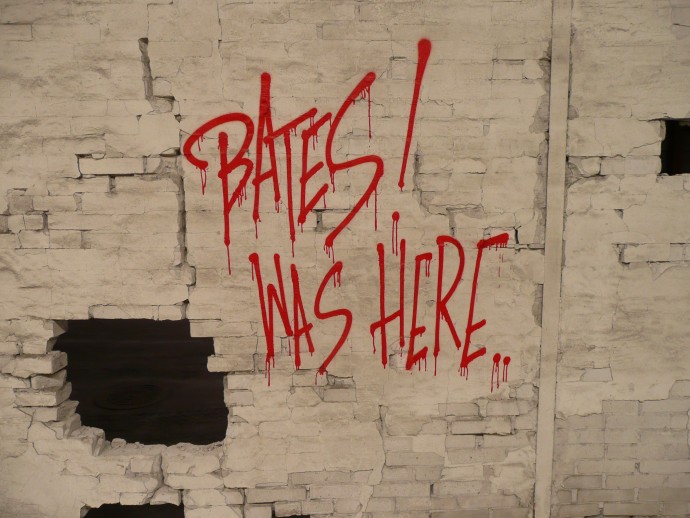 Bates has made his mark on the Copenhagen and worldwide graffiti scene for about 25 years now. He has his first ever solo show opening Saturday, October 24th 2009, titled ”Its about time!” Ilovegraffiti met up with him shortly before the opening and got a little, exclusive interview between the hectic preparations. Read the whole thing after the bounce 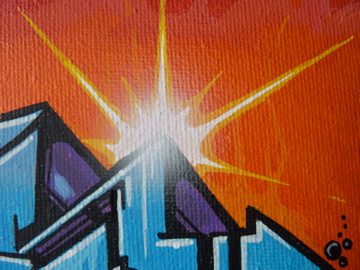 ILG: Its your first solo show after 25 years of writing?
Bates: Yeah, its about time, just like the title. Alot of people asked me to do it, but Ive just been busy with travelling and painting and stuff, everything takes time and I just kept my focus elsewhere. I did my first canvas in 1985 actually, and Ive been part of group shows here and there over time. But now I felt it was time to challenge myself and do a show and do some canvas. I felt I had already done alot of other things, this was one thing I had never done. I had lots of ideas for concept walls on stock, but now I tried do them at home on my canvas instead and move on.
Actually, what really made this happen was when my mom passed away in 2007. She had always told me to do canvas and her passing really made me think about her words. So she motivated me to do it!
Obviously I also talked to alot of writers who is already doing this and recently I was part of a show in Paris called Million Cornette de Saint Cyr. I sold two canvas at that show, so that was nice. I talked alot to Smash137 about this canvas thing, and Daim and Loomit, all of them have a lot of experience with this part of the game, experience that I also try to gain now.
The canvas in my new show, I worked on them for 1 year and managed to do around 30, that I havent shown anywhere untill now. Style wise I’m not trying to do anything than what Im already known for, its straight graffiti styles on canvas, no art or no new tricks, just pure graffiti. So yeah, its definetely about time! 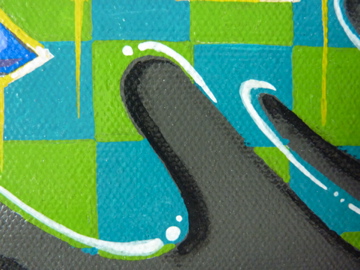 ILG: Speaking of shows, you been part of many shows before?
Bates: Yeah there have been shows here and there through time. Like I said, I did my first few canvas in 1985, and my mom kept them in her bathroom and had them on display there. Then I did a show at my local library in 1985, managed the whole thing with the local kids. Then came the famous danish show Ovengaden Nedenvandet in 1987, with lots of Copenhagen oldschoolers, I sold 1 canvas there, that was all hooked up via Helle and Peter that made the book Dansk Wildstyle Graffiti. I remember that Kyle did the poster for the show, this show was very important here, it was the first of its kind. Oh yeah, I did some camvas for Zebsters show in Munich 1991, the MC Frisher Jam, I did a canvas with Wane COD. Later came a show in Stockholm 1997, done with Jacob Kimvall. For that I did my special Wildstyle outline with a Pitt character. That later ended up as a Tribal tshirt. Then there was two shows in Oslo in the late 90’s, one with Goal and the Berliners, Kaos45 and Phos4 and after came the crew reunion of All In One, a real fresh show with my old AIO crew mates Goal, Side, Circle and Tariq. But for all the shows, I never felt happy and satisfied when I did canvas. It always felt crammed and wrong somehow. Its only recently that I started liking it more, and the tools and time are there, the new markers and materials. Now they started feeling good, so now Im finally doing my own show, like I wanted, only me doing it.
I got a big space offered for the show, so Im doing it all by myself, no gallery involved, Im doing the flyers and the promo and everything, like I want it. I just want to try it, this show is not to make money or get famous, I just wanna do it and try it and see where it takes me.
One of the few regrets I have in graffiti is actually that I havent done a few canvas along the way through the years, but Ive been too busy with the walls and they are for the most part gone now. Hopefully, these canvas will outlive me, and be here when Im gone one day. 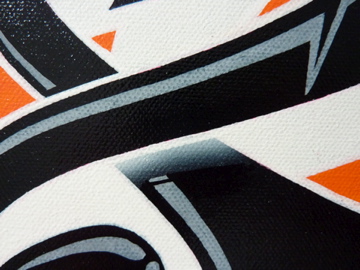 ILG: Whats up with you and graffiti in 2009?
Bates: Ive set myself alot of goals through the years and done them, like going to NYC and paint, be part of different projects, walls, books, etc. Now this show is coming up and I hope it can lead to something more maybe, open some new sides, it will be interesting to see. Just cause I do this show, it doesnt mean that im stopping my other activeties, no way, im always active. But this canvas thing is good for the long Scandinavian winter, where its very cold and most people do silvers, then its good to produce some color burners on canvas.
The show is a chance to get a piece of me, to see my stuff up-close. Actually, me and Great will be opening a little webshop on our site, where people from around the world can buy our canvas. So look out for that. And Great got some dope stuff on his canvas too! We will see how far we can take it, maybe we do some tshirts and who knows. If the americans can do it, we can do it! 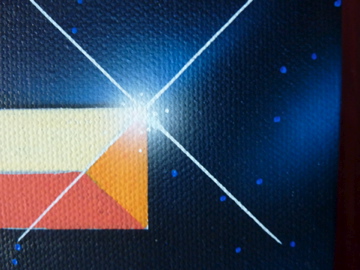 ILG: You have been almost everywhere in the world and painted, what stands out in your memory looking back?
Bates: All my travels? Well, they are all interesting and important to me in different ways. And all together, they all influence me in one way or another. So its not like one stands out, but they all influence me. Meeting new friends, seeing new spots, seeing different people paint, you always learn something, even me. And the whole game have just accellerated the last decade, I never imagined it would come this level. I dont have as much time to travel anymore, this year I turned down alot of offers to go to jams and events here and there, but its hard to get the time to constantly travel. There are still lots of places I want to go, maybe this show can pave the way for me. I really wanna go to Australia and Canada for example, both places seem very cool, with great graffiti and good scenes. 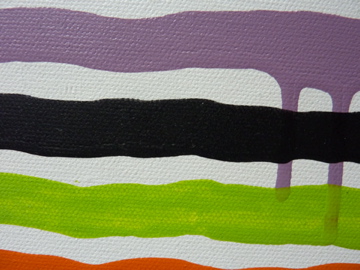 ILG: Some of your other projects at the moment includes the Exchange Project?
Bates: Yeah, Im working on stuff for the upcoming Exchange Book, its round 2 of the project now and we are gathering exclusive stuff that why there isnt that many updates, but the book should be a good one. Its originally Rime’s project and Im the vice president, haha! We did the first round and the tour and recently Ive been heavily involved in this second round, picking out writers and organising and stuff. I really like the idea of the Exchange, its pushing real graffiti, the tradition, doing sketches and exchanging ideas. Pushing style! Studying. Working hard on blackbooks and style. Not smoking blunts and freestyling pieces. Good stuff comes from good homework. 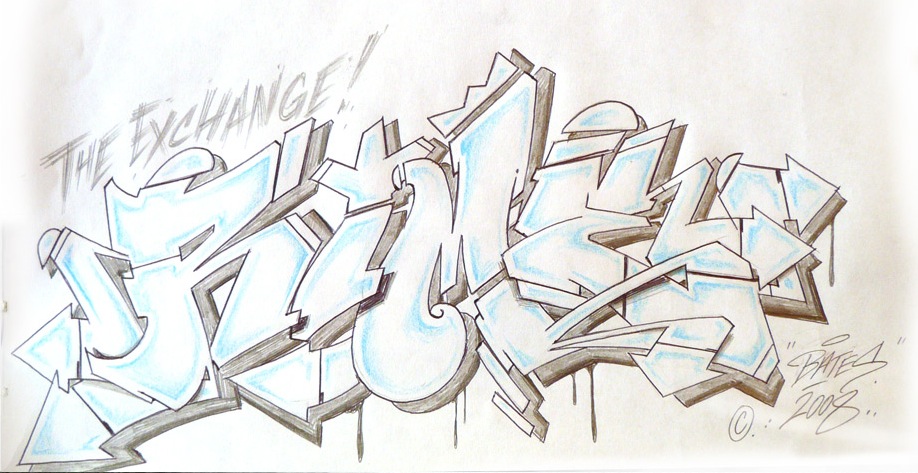 ILG: These days, the internet plays and ever increasing role in graffiti, whats your thought on that?
Bates: The internet here now and its the future, no doubt. If you are not there, you are loosing out. You might aswell be part of it and try to push it in the right direction. I got my website together with Great and through that we can control our stuff and how it looks. I also got a blog, but Im not a computer wiz, I have just been trying to get in to it all at my own pace. If you have a site or a blog, you should update it often and work with it. My blog is about me, I cant cover the whole world, other blogs are great at that, like ILG. I just promote myself and sometimes a few friends, if I dig them. But the impact is big, lots of people check it and I get lots of feedback. Like everything else, I just do things the way I want them done and try to influence the world that way. But the internet is both good and bad for graffiti. The graffiti world definetely got mixed up with the net, styles are now worldwide. Things are online before they are dry, Flickr is amazing like that. Its better than Google. I even use Flickr as a source of inspiration, find some of my characters there and other things I need for concept and backgrounds. Or peep other interesting worlds, like Lusker41 and his adventures into abandoned places. The internet is really good though, I try to follow the whole worldwide graffiti scene, lots of places got someting good going on, anything from the walls of Toronto to the favelas of Brazil, or the hotspots for trains like Vienna or Naples. 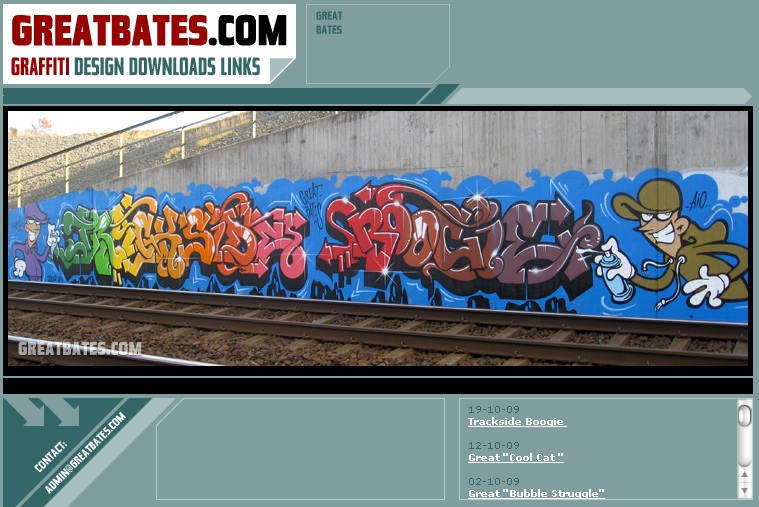 The Bates show: ”Its about time” opens Saturday October 24th 2009 at Copenhagen Streetwear, Lars Bjørns Strædet, Copenhagen, Denmark.
ILG will publish a report from the opening.
Below is a teaser video for the show.