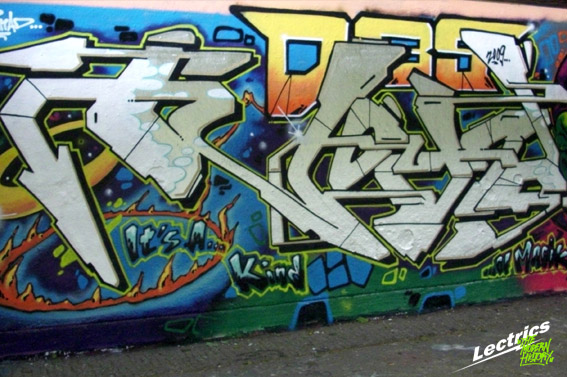 „I started writing graffiti 1994 in my hometown Bremerhaven, in the north of germany. I painted my first piece in the backyard of my school at daytime – like an idiot. Although Bremerhaven is a small city, there was a big Hip Hop scene with a lot of talented artists at this time. Maybe you know Bremerhaven because of the hardcore rapgroup “No Remorze” and their DJ Stylewarz. There was a big graff-scene with very active and nationally known writers, too. The guys who teached me the first aspects of style where from the SIM crew, like Phex, Phem, Skion and Toe and another guy named Lans from the TJ crew, who is still painting. The scene at this time was focussed on “stylewriting” and there was a big influence from Berlin writers, who were also part of the SIM crew. But the scene were destroyed at once in 1998 because of massive police surveilance and nearly all stopped painting. I moved to Nuremberg (Bavaria), where I started writing my name Nomad. I had painted a few trains and line-pieces in my hometown, but in Nuremberg it started the real way. I became am member of the oldskool SM 365 and the NBG crew, and untill now we are really good friends. In 2001 I moved to Hamburg and I think I will stay here.“