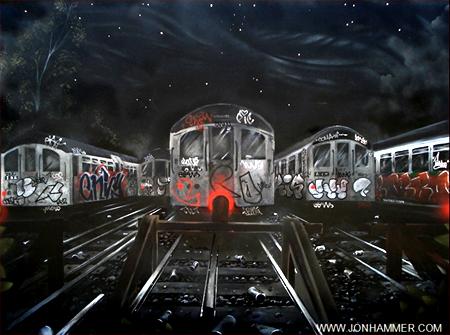 „In this painting I have gone back to the gritty roots of UK graffiti, to show where it all started, tags, throw-ups and early pieces on London trains. The images from New York in the book Subway Art and the film Style Wars had radicalised fertile minds in 1984 where it incubated, mutated and developed through important years of early bombing. By 1986 London writers had become numerous and dedicated enough that most trains were running with live graffiti on them and confident enough to concoct identities and assimilate styles more independently of New York influence, by now using our own indigenous cultural references and attitudes. This is when our scene really began in earnest as a uniquely London phenomenon rolling on the oldest underground railway in the world. Pieces got bigger more beautiful and more original, raising the bar higher and higher. This painting is not meant to be a complete list of London’s graffiti pioneers but features many of London’s legends. I’ve painted it from my own personal memories with input from my pal Envy, one of my old bombing partners, and from my experiences of the yards (particularly Loughton) between 1987 and 1989. Anyone who spent any time in the yards of London in the late eighties will instantly recognise the vintage rolling stock, layers of stains of old tags on the panels, empty cans on the gravel, and spookily quiet atmosphere in this painting. It’s based on Loughton train yard. Check out the leaves around the outside and the trees to the left, it could be accessed through bushes and this was one of my favourite views of the fronts of the rolling stock as emerging. I have put people’s tags and throw-ups in the places I remember them hitting wherever possible. I realise there are discrepancies that purists will notice, (I have included certain writers who didn’t actually hit that yard) but it’s not meant to be historically accurate more a ‘dream-yard’.“