Interview with How and Nosm

“Europe has always looked across the Atlantic to find its inspiration when it comes to classic writing style, in pieces, handstyles, throwups. New Yorkers like Lee, Seen and TATS cru pioneered big mural productions, but Europeans used what was already there and took it to a total different level. Their involvement in paint development and distribution, with actual artist knowledge, made it so that new technics developed at a faster pace. Europe’s advancements have influenced writers in the States especially in cities like New York and Los Angeles.”

ILG: Please introduce yourself a bit, who you are, where you come from and what you do now?
H&N: We’re twin brothers How and Nosm, we were born in the city of San Sebastian in the Basque Country of Spain. We grew up in Duesseldorf, Germany where there wasn’t much for broke kids on welfare to do. So we spent most of our time on the streets skateboarding and naturally came across writing at a young age. In 1988 we started tagging at the age of 13, scrounging up paint and spending most of our days and nights outside bombing, getting drunk, and smoking Amsterdam weed. It was the beginning of a long journey that hasn’t stopped yet. Now we are residing in New York City since 1999, we’ve been working on various projects like advertising campaigns, paintings, sculptures, and endless murals, even working with steel. 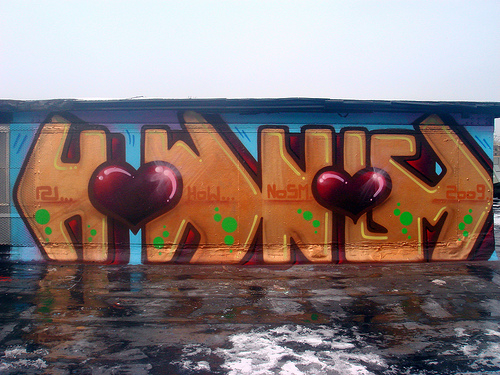 ILG: Whats it like to make a living from spraying?
H&N: Spray painting for a living has positive and negative aspects. There’s a lot of money to be made in the graff/art business but you are forced to constantly display a professional demeanor. Running a business often overshadows the painting part, which can be pretty annoying, especially since the part we love is painting outdoors. But office work is a must, a reality you can’t argue, fight, or deny. But once you realize the the money is what enables you to travel, spread the graff virus, buy an endless supply of paint, and rent locations that you otherwise would have to grab illegally. Not to mention be able to afford a lawyer to protect yourself from law enforcement (staying out of jail=painting more), you learn to appreciate the business aspect. There are a lot of critics that think we’re sellouts for commercializing the writing, but all you have to do is look at our history as writers and it’s obvious why their opinion doesn’t phase us. For the most part it’s great making a living from painting and spending our time doing what we love doing. 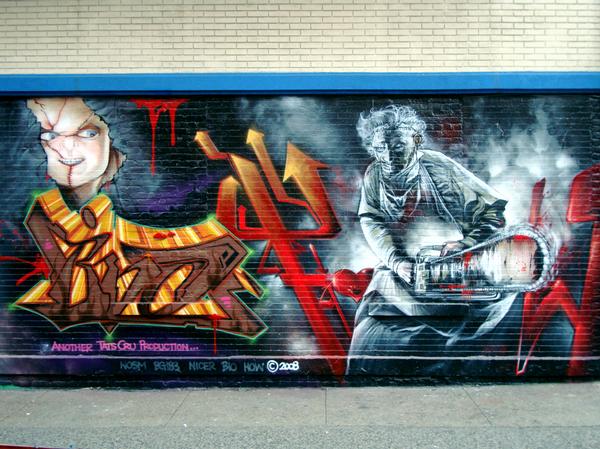 ILG: How do you manage to travel so much?
H&N: Well, running our own business affords us a lot flexibility. We know a lot of people all over the World, we can take time off whenever we want, and like we mentioned before, the living we make spray painting pays for those trips. 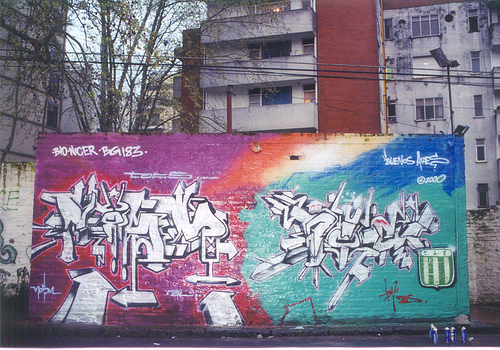 ILG: What places have been special for you and why?
H&N: The most interesting places we’ve visited on our travels have definitely been the ones we managed to conquer on our own. It’s always a challenge finding paint, locating walls and spots to hit, and overcoming language and cultural barriers, it makes us realize what an organized team we are. This is really a difficult question to answer, having visited more than 50 countries! Thinking of places like Lake Titicaca in La Paz, Bolivia; the drug slum “el cartucho” in Bogota, Colombia; the streets and yards of Cape Town, South Africa, and so on and so forth. 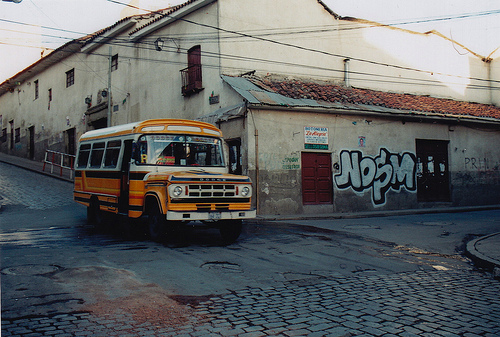 ILG: Whats the situation in NYC in 2009 for graffiti? For legal work and murals? For bombing and trains?
H&N: The graff movement has slowed down a lot since the late ’90s when crews like TATS cru and FX would battle and try to out do each other with large scale murals. Some crews have split, some quit completely, and some just get a little lazier with age. It also has a lot to do with police harassment, gentrification of writer friendly neighborhoods, intense sentencing, and the Judicial system (which makes it difficult to get the wall permits). Not to mention the city’s no-tolerance policy and renewed buffing methods are taking a toll on our movement and poster companies are spreading like a desease and robbing us of wall space. Cctv’s and higher security, snitching, none of which makes it easy for us. The list goes on and on, but there are still a chosen few who dare to paint what ever pleases them. 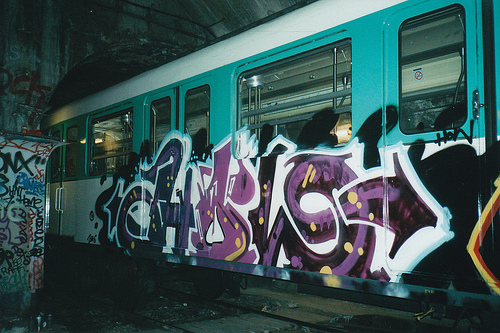 ILG: Having indepth knowledge about both Europe and NYC, how do you think the two scenes compare? Whats similar and whats different?
H&N: Europe has always looked across the Atlantic to find its inspiration when it comes to classic writing style, in pieces, handstyles, throwups. New Yorkers like Lee, Seen and TATS cru pioneered big mural productions, but Europeans used what was already there and took it to a total different level. Their involvement in paint development and distribution, with actual artist knowledge, made it so that new technics developed at a faster pace. Europe’s advancements have influenced writers in the States especially in cities like New York and Los Angeles. I would say since there are way more writers over there, and things are easier going when it comes to painting illegally, that Europe is more advanced right now. But each one teach one! So lets do this together.

ILG: Care to comment on the recent Vandalsquad book?
H&N: The Vandal Squad book is an embarrassment for the NYPD and New York, and a total diss to its writers. They have a shitty publishing company, weak quality, and the best hardcore shit in it is from Europeans! So whats the point?? 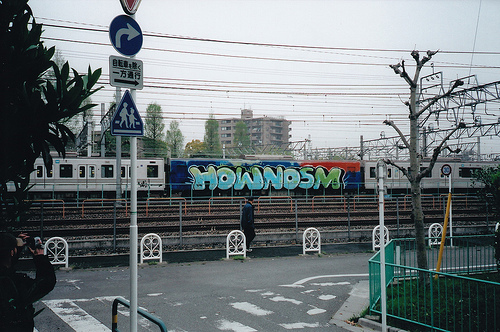 ILG: What your opinion on spraypaint and that whole market today, with so many brands and companies involved?
H&N: Keeping up with all the new graff gadgets flooding the market nowadays is a job in itself, and America is always behind, since most of the stuff is imported from Europe. All the new colors and spraypaint brands are hard to keep track of, plus they make painting so easy that newcomers who’ve been painting for two years look like they’ve been around for years. But all in all we think its benefiting and expanding our movement. These developments give writers the possibility to do almost anything, an opportunity we’ve been waiting years for. Besides, we’re starting to control our own market and getting independent. 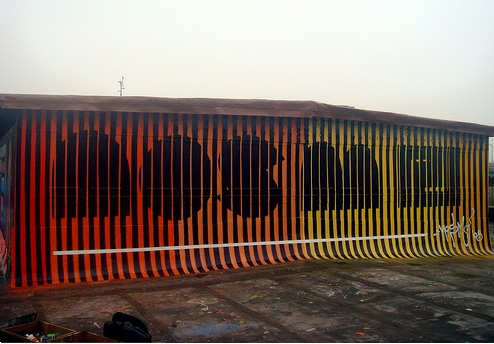 ILG: Whats do you think about sponsorships in graffiti?
H&N: Long term sponsorships should mean receiving a regular check in the mail. There shouldn’t be explotation of writers within our own industry, paint alone just don’t pay the bills. 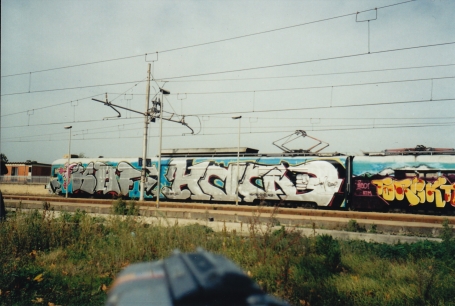 ILG: You have a blog, and use Myspace and Facebook, what do you think about graffiti on the internet?
H&N: Graffiti on the internet really helped spread the movement worldwide, to the farthest imaginable corners of the planet. It helps artists to connect, but it also makes Big Brother aware of what is going so he can spy on us and infiltrate the movement. Be careful how you handle the sharing of information online. Even though it destroys a lot of its originality and creates a lot of fakes in this industry. It’s necessary for graffiti to have internet presence, today’s societies rely so heavily upon it. 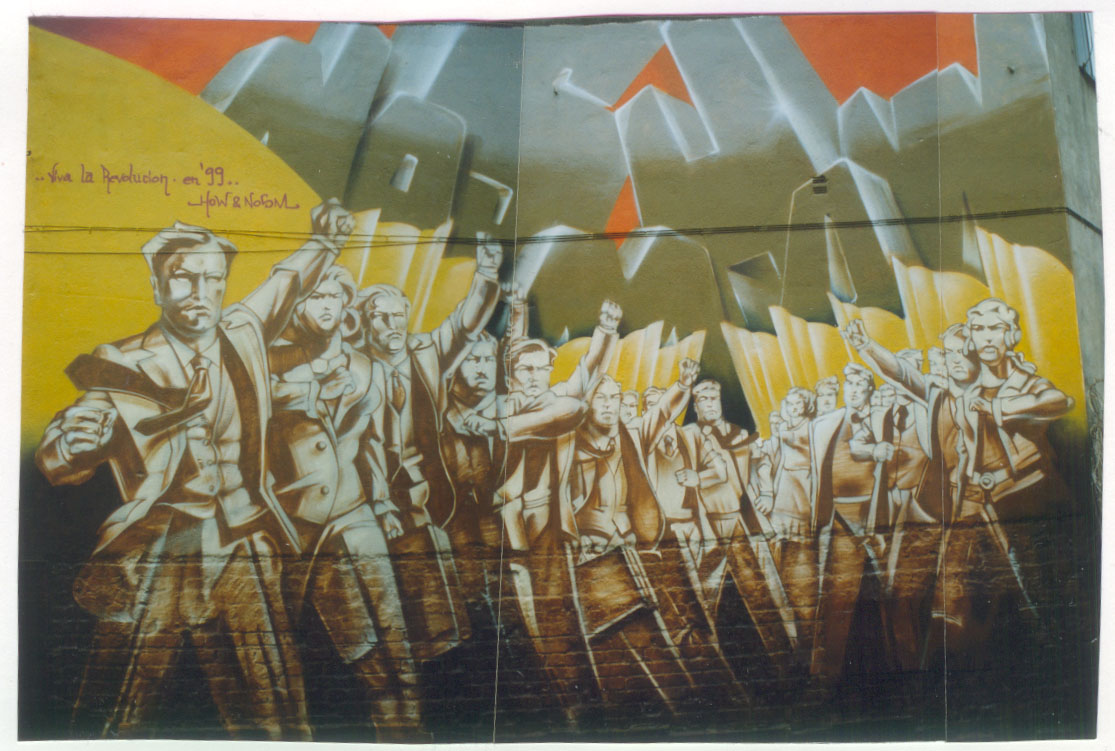 ILG: Tells us about your upcoming website?
H&N: It was about time for us to create an entire new website since the old one hasn’t been updated in over ten years. Not even once. The new site’s going to have a total different look to it, simple, but with a lot of content that hasn’t been show yet with some classics mixed in. The hownosm.org website will be linked to all of our internet presence and it will be released in approximatly 2 months! So stay tuned… 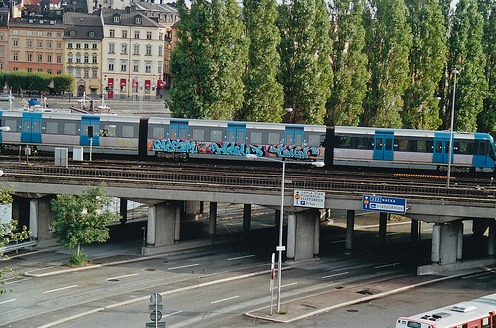 ILG: Whats your goals in the future?
H&N: 2009 is here and we are still doing our best to keep up the legacy. Work ethics have to be improved and reinventing ourselves is a neccessity. For the last two years we’ve been working on hundreds of paintings that experiment with all kinds of medias and technics. The gallery world is about to be turned out. We just spent an entire month in Rio de Janeiro doing all angles of graffiti. And some days in Puerto Rico impressed various people. There are trips to India, Thailand, and Los Angeles planned. Believe it or not, we haven’t made it out to the westcoast yet! We are currently working on a book trilogy documenting 30 years (1980-2010) of TATS cru, which definitely requires a whole lot of intense work. Plus, there are some other projects to come for the underground fiends to come… that obviously are not going to be mentioned, claimed, or advertised. And TATS Cru’s goal of at least one wall per week is going to be accomplished once more, for the 20th year in a row.

ILG: Whats your goals in the future?
H&N: Like we mentioned before, we set certain goals and the goal to those goals is to beat them!
ILG: Any message to the people reading this?
H&N: Thanks for reading this.
ILG: Shoutouts?
H&N: Respect!!! 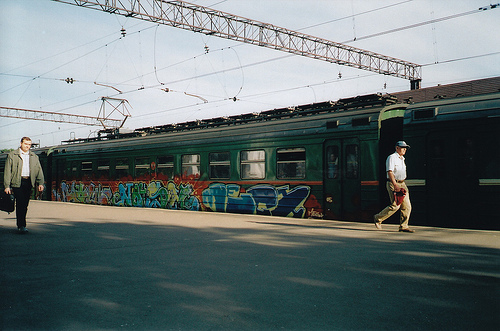 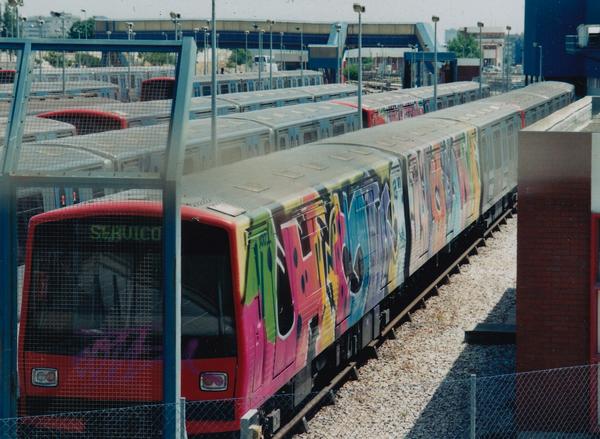